Tiger Squadron specializes in keeping crowds on their toes with a range of exciting formation flying maneuvers at events and air shows throughout Southern California. 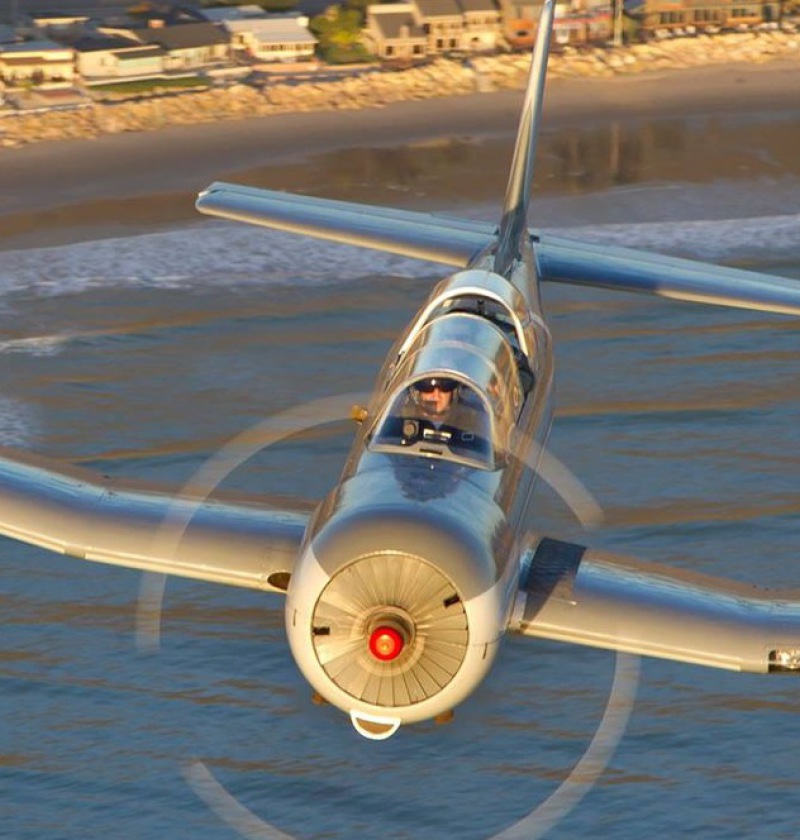 Our primary aircraft is the Nanchang CJ6A. This 3,000 pound fully aerobatic trainer with a distinct military heritage has become a popular choice among advanced civilian pilots, especially among members of the Red Star Pilots Association.

The CJ-6A is an all-original Chinese design that is commonly mistaken for the Russian Yak 18A. Its predecessor, the Nanchang CJ-5, was a license-built version of the Yak-18. However, advancements in pilot training brought a need for a new aircraft with improved performance and a tricycle landing gear. When the Soviet Union developed the Yak-18A, PLAAF engineers decided that its performance and design would not suit China's needs. A few important Chinese aircraft designers were involved in the design of the CJ-6, Lin Jiahua (Nanchang 320 Aircraft Factory designer, previously involved in CJ5's design project), Xu Xunshou (key member of J-7/J-8 fighter jet design team in 1970s) and Zhiqian Huang (Chief designer of J-8 fighter jet).

During late 1957, aeronautical engineers Cheng Bushi and Lin Jiahua began work in Shenyang on a trainer design that addressed the shortcomings of the Yak-18A. The design they delivered featured an aluminum semi-monocoque fuselage, flush-riveted throughout, and introduced a modified Clark airfoil wing design with pronounced dihedral in the outer sections. Wind tunnel testing validated the design, and in May 1958 the program was transferred to the Nanchang Aircraft Manufacturing factory where Chief Engineer Goa Zhenning initiated production of the CJ-6. The first flight of the CJ-6 was completed on August 27, 1958 by Lu Maofan and He Yinxi.

Power for the prototype was provided by a Czech-built horizontally-opposed piston engine, but flight testing revealed the need for more power, so a locally manufactured version of the Soviet AI-14P 260 hp radial, the Housai HS-6, was substituted along with a matching propeller, and with that change the CJ-6 was approved for mass production. In 1965 the HS-6 engine was upgraded to 285 hp and redesignated the HS-6A, and the aircraft equipped with the new powerplant were designated the CJ-6A.

A total production run estimated at more than 3,000 aircraft supplied CJ-6 aircraft for PLAAF training, as well as for export (as the PT-6) to countries including Albania, Bangladesh, Cambodia, North Korea, Tanzania, and Sri Lanka.

One thing to note is that the Nanchang CJ-6 makes extensive use of pneumatics to control the gear and flap extension/retraction, operate the brakes and start the engine. An engine-driven air pump recharges the system; however if air pressure is too low to start the engine then the onboard air tank can be recharged by an external source. If an external source is not available then the engine can be started by hand swinging the propeller. Currently, there are about 200 Nanchangs in the United States. 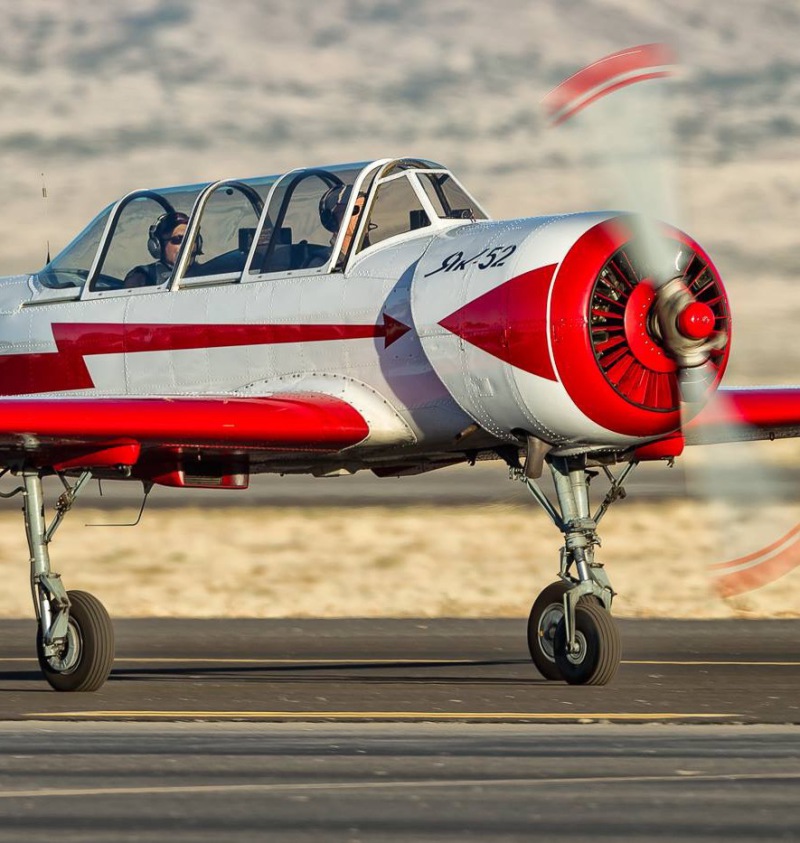 The Yakovlev Yak-52 is a Soviet primary trainer aircraft. Despite its obvious World War 2 heritage, the Yak 52 first flew in 1976 as a development from the Yak 50 single-seat Aerobatics Competition aircraft. The Yak-52 was designed originally as an aerobatic trainer for students in the Soviet DOSAAF training organisation, which trained both civilian sport pilots and military pilots. Since the early 1990s and the fall of the Soviet Union, many Yak 52s have been exported to the west. Of the approximately 1,800 produced to date, most now fly in the United States, United Kingdom, New Zealand, Australia and other western countries.

The Yak-52 is all-metal structure with fabric control surfaces and powered by a 360 hp Vedeneyev M14P 9-cylinder radial engine. It has inverted fuel and oil systems permitting inverted flight for up to two minutes. The engine drives a counter-clockwise rotating, variable pitch, wood and fiberglass laminate propeller. At 998 kg (2,200 lb) empty weight, the Yak-52 is responsive and very capable as an aerobatic aircraft, but at the same time it is also straight-forward to fly and land. It has been used in international aerobatic competition up to the Advanced level and stressed to +7 and -5 Gs. Roll rate is approximately 180 degrees/second and is capable of every manuever in the Aresti catalog.

The Yak-52, like most Soviet military aircraft, was designed to operate in rugged environments with minimal maintenance. One of its key features, unusual in western aircraft, is its extensive pneumatic system. Engine starting, landing gear, flaps, and wheel brakes are all pneumatically actuated. Spherical storage bottles for air, replenished by an engine driven compressor, are situated behind the rear cockpit and pressure is displayed on the instrument panels. The operating pressure is between 10 and 55 bars (145 and 725 psi) and an emergency circuit is reserved for lowering the undercarriage if the normal supply is exhausted or the compressor fails. Additionally both main and reserve bottles can be charged from a port on the ground with compressed air, usually from a Scuba type air bottle.

The ground steering/braking arrangement takes some adjustment for flyers accustomed to hydraulic toe brakes, because the 52 uses differential braking controlled by rudder pedals and a hand operated lever on the control stick. The tricycle landing gear is retractable, but it remains partially exposed in the retracted position, affording both a useful level of drag in down manoeuvres and a measure of protection should the plane be forced to land "wheels up."

A number of "westernised" versions of the Yak-52 are now produced. The replacement of the existing Soviet avionics, fitting of a three-blade propeller and the M14PF 400 hp upgrade to the usual 360 hp M14P engine, and conversion to conventional "tail-dragger" landing gear (Yak-52TD) are some of the modifications made to the standard aircraft. There is also a factory produced Yak-52TW tail-dragger version. The TW has an extra 120 l (32 US gal) of fuel capacity in two extra wing tanks, the M14PF engine designated & three blade propeller, an electric start, and modern instruments. On April 16, 2004, a modernised variant Yak-52M was flown in Russia. It is fitted with a modernized M-14Kh engine, three-blade propeller, and other modifications. 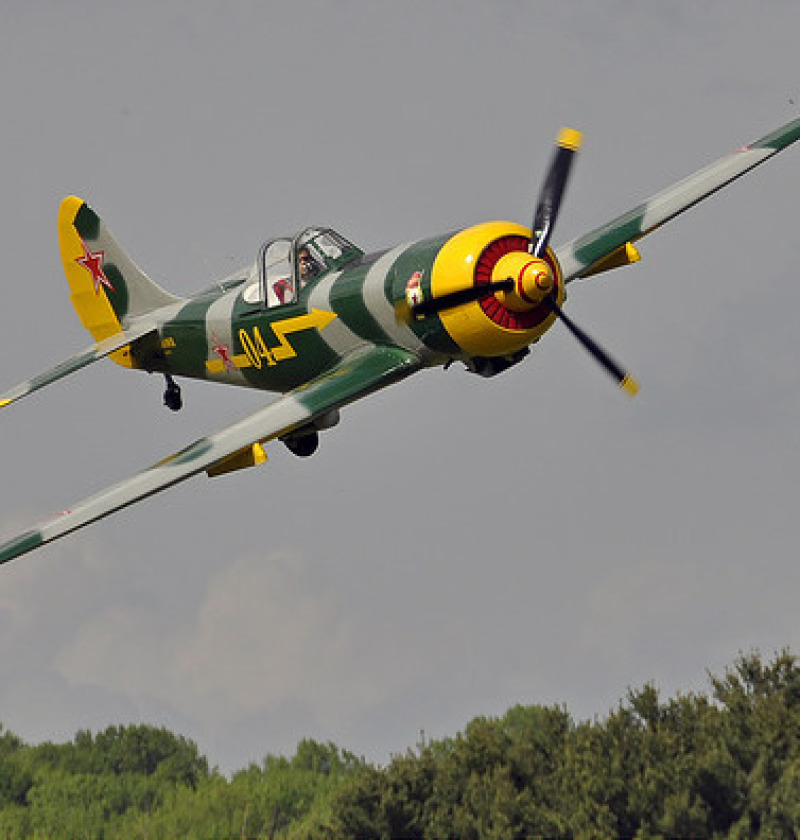 The Yakovlev Yak-50 aerobatic aircraft is a single-seat all-metal low-wing monoplane with retractable main wheels and exposed tail wheel. The control surfaces are fabric-covered to save weight. The aircraft is not equipped with flaps.

The supercharged engine may be the Vedeneyev M14P (standard production line version), M14PF or M14R, producing between 360 and 450 hp and driving the propeller via a reduction gearbox. The landing gear, brakes and engine starter are operated by compressed air. Replenished by an engine-driven compressor, the main and emergency air bottles are contained within the forward fuselage between the firewall and fuel tanks.

The Yak-50 had exceptionally fine handling characteristics enhanced by a relatively high power-to-weight ratio. It has a tough and agile airframe - the type was twice World Aerobatic Champion. It was used as a military trainer by several countries.

Other aircraft serving with DOSAAF were "officially" scrapped or placed into storage after they were superseded by the Yak-55 and Su-26.

It is these aircraft that form the bulk of airworthy "survivors" today. Only a few (approx. 90+) are airworthy and remain in private hands in Europe, the USA and Australia. 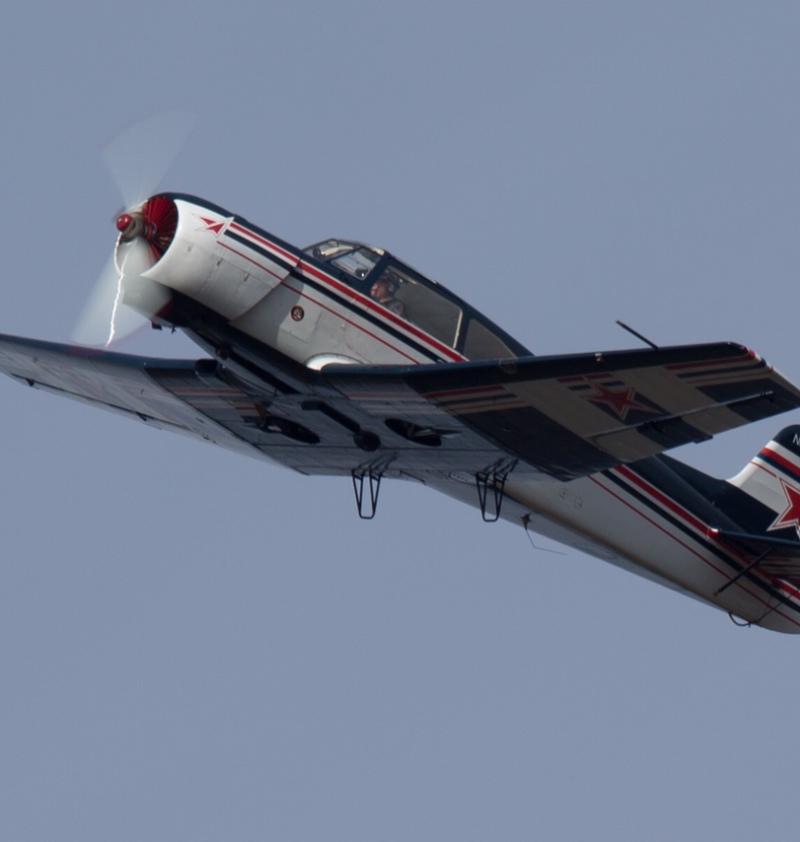 The Yakovlev Yak-18T is a four- or five-seat fully aerobatic utility aircraft. Introduced to train Aeroflot pilots, it has gained some popularity as a sportplane both inside and outside the former USSR. It is powered by a 268-298 kW (360-400 hp) Vedeneyev M14P radial engine, and is designed for stresses of +6.48/-3.24.

The 18T was designed in the late 60's, as a civilian aircraft. The aircraft has a nosewheel, is a four- or five-seater, and has a nine-cylinder 360 hp radial. The Yak-18T shares systems with the Yak-50/52 family. These aircraft all have the 265 kW (355 hp) Vedneyev M14 nine-cylinder radial engine as well as the same underlying compressed-air system for engine starting, brakes, undercarriage and flaps. The propeller, avionics and other parts are also shared. The Yak-18T, like all Russian aircraft used for training, is aerobatic.

Compared with other four-seat light aircraft such as the Cessna 172 or the Piper PA-28, the Yak-18T is only a little wider and longer but it is much heavier and is equipped with a considerably more powerful engine. The Yak-18T is perhaps better compared with the Piper Saratoga which has two extra seats but which has a similar maximum weight, together with a retractable undercarriage and a similarly powerful engine. The Yak-18T is, however, distinguished by its strong construction, aerobatic capability and docile yet responsive handling characteristics.

The Yak-18T prototype had its first flight in mid-1967 and subsequently the type was placed in series production in Smolensk.

The Yak-18T went on to become the standard basic trainer with Aeroflot flight schools, while small numbers also entered service with the Soviet Air Force as liaison and communications aircraft. After approximately 700 were built, many for Aeroflot, production ceased in the late 1980s, to be resumed in 1993.[1] In 2011 it was claimed that the type remained in small-scale production by the Yakolev Design Bureau, although apparently none had been produced in more than a decade. Technoavia has marketed the SM94, its own development of the Yak-18T featuring curved front glass, larger capacity fuel tanks and choice of avionics package, but production is dependent on orders being placed.